The DriZzleR gasifier was able to prove his concept in hundred hours of operation.

The manual drizzle mode has been changed a long time ago to automatic operation.

The fuel supply was realized by an auger. The regulation of the flaming pyrolysis been done by the "Pyrotouch". The grate shaking "cleaned" by pressure changes in the gasifier automatically.

We might therefore assume that the development is now complete. The gasifier runs completely automatically. Trouble-free and is very easy to maintain by the simple design.

However all "Downdraft" gasifiers had sometimes problems with grate. In my eyes, the grate is the most important component inside a gasifier. If the grate is designed "to open" a lot of fuel will be wasted. If the grate is too fine it must often cleaned off, to prevent blockings. Frequent cleaning of the grate produces tar components which must be deposited in the filter. Also, any changing of the gasification process is counterproductive. The temperature in the gasifier starts to oscillate and thus the gas quality drops up and down. When using DIN pellets you have a fuel such as premium gasoline. Standardized, absolutely free of metal parts, stones or lumps of clay. However pellets tend, with the finest ingredients contained, to clog the grate by a fine carbon layer. Then there is a kind of "carpet" on the grate and blocks it. With wood chips, there is a similar problem. In addition to the fines in the form of wooden needles leaves or wood bark. Additionally, there are various items in the wood chips. Wood chips are often stored in agricultural holdings somewhere where impurities are on the agenda. These components later lay in the gasifier. There the lay on the grate and block it. Even the cleaning of the grate has stopped working sometime and you have to clean the gasifier manually by hand.

This problem is often compensated by a "special" grid construction. A "opened" grate then ensures that stones and nails can also fall out from the grate. Charcoal should be remain in the gasifier until the last useful ingredient are used. The remains unusable for gasification are deposited then in the cyclone and later deposited in the fine filter.

Another major problem is the grate temperature. I've gotten quite a few already melted metals grates. Also V2A or V4A make problems at high temperatures. This heat problems can be naturally eliminate with steels for "refractory". But prices for steel of this quality are not cheap. Very high temperatures just during the gasification of charcoal. Why is a blacksmith working on a charcoal fire? :-)

Just the open design has helped the DriZzleR Gasifier to success. Simple in design and probably one of the easiest gasifiers to build without welding equipment or special skills in metalworking. There are DriZzleR gasifiers built only with a drill and tools that can be found in every household. Anyone can build it. Or can take it to and metal-working shop to build a DriZzleR with different materials in a short time.

In some countries opentop gasifiers are banned because of fire hazard. To understand laws and to test for meaningfulness I will leave to other people. Often some people feel fear running an open gasifier.It may come at an detonation to backfiring. I myself have never experienced with a DriZzleR gasifier had made any flashbacks. And I know this kind of flashback from my time with the Imbert clone gasifier. In my opinion, a closed gasifier is much more dangerous.

Now how can we fix the problem with the grate and also the "in some countries legally questionable OpenTop Design" without losing the benefits of the DriZzleR Gasifier?

The upside / down DriZzleR gasifier operates on the same principle. Of course with plenty a lot of air, a constant "flaming pyrolysis" and the fuel supply as needed, just as much as just absolutely needed to stay the gasification process running.

Just turn the DriZzleR upside/down ;-)
Also the security attention was paid. The upside/down DriZzleR Gasifier has a pressure valve installed. Should there would really be a flashback this valve opens and allowing "steam" to blow out. Even for hedging a burn back into the auger is provided. When the temperature in the auger exceeds the 90°C it will be completely flooded with water to prevent back burning into the container. 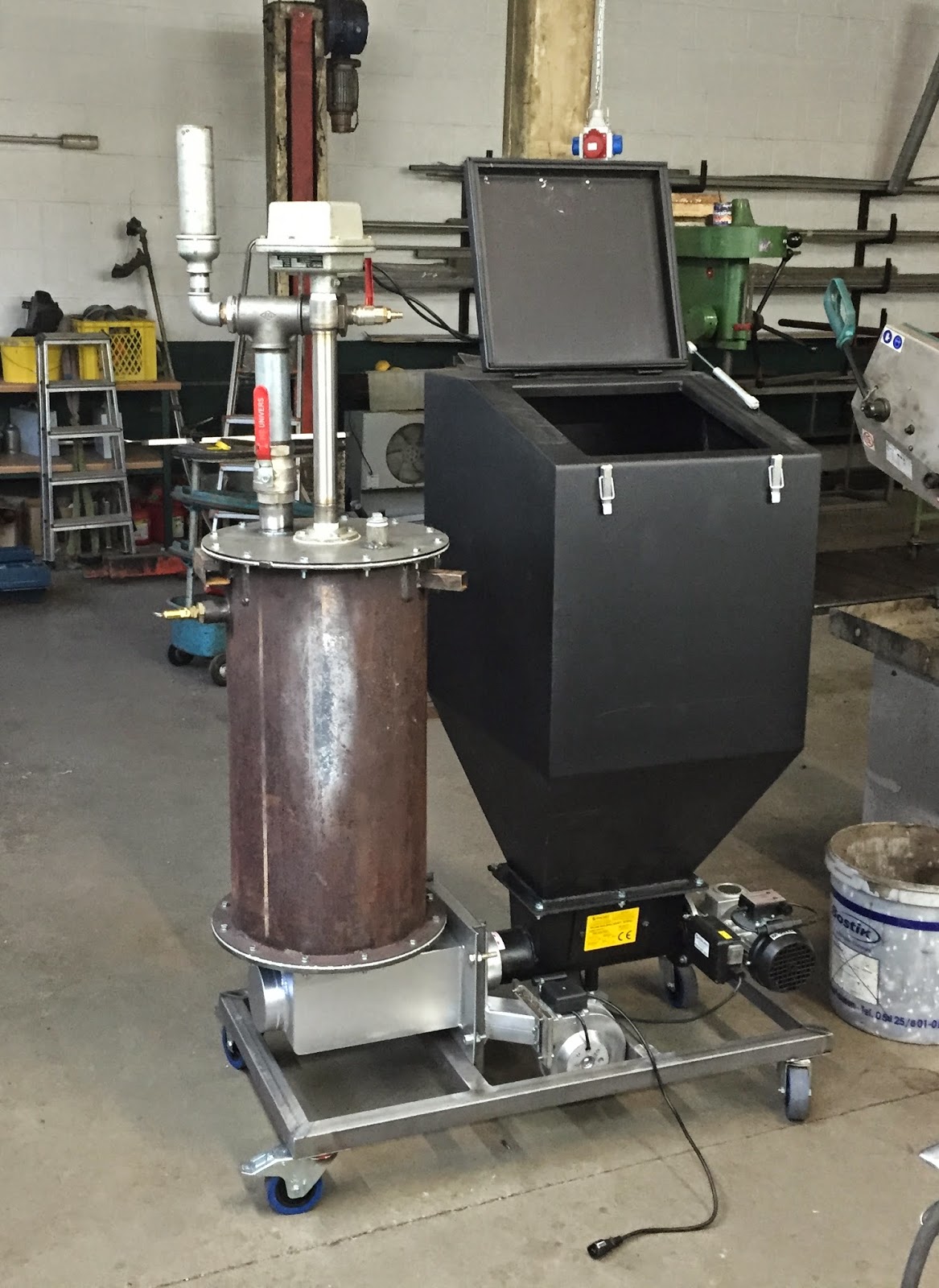 To remove the grate problems, there is actually only one way in order to enable the requirements of a permanent gasification. This model called the "fluidized bed gasifier". This type of gasifier is normally only used for Gasifiers above the 500KW class. Smaller "fluidized bed gasifier" are rare. The only exception of the "fluidized bed gasifier" styles are 2 homemade gasifier i know. One of Mr. Pertl and one of Holzigas. This type of gasifier has not a traditional grate design. There is no grate of metal melting away under the heat or could be destroyed. The residual charcoal in the gasifier forms a three-dimensional grate. The vacuum in the system removes the fine pulverized coal deposited with the gas stream from the gasifier. Waste materials such as stones or lumps of clay nails apart and try to hinder the gasification process can not be measured. The gasification takes place completely. There remains nothing except coal dust from the gasification as a waste product. A residual-free use of fuel increase the efficiency and leads to more efficient use of energy.

In this type of gasifier the complete residue (charcoal dust) is discharged with the gas. Unfiltered "darted" then thousands of pulverized coal particles with the gas from the gasifier. In the unfiltered "flare" you can see this pulverized coal as a "firework". If you need engine operation (EGG - Engine grade gas) the gas must be filtered out when you use it for heating operating (HGG - Heating degree gas) the coal dust offers more potent gas. A filtering of the pulverized coal is only necessary for EGG purposes. A cyclone separator ensures this pulverized coal in first filter stage from the gas. In the 2nd stage filter, a fine filter, the last finer elements ,ust be removed.

Usually this type of gasifier has a rather bad reputation. So assuming, in the literature that this gasifier produce less tar than a "updraft" gasifier. But even more tar than the normal "Downdraft" gasifier. This must be proved however only. FAO writes about the gasifier type the following:
"
Other disadvantages of the fluidized bed gasifier lie in the relatively high tar content of the product gas (up to 500 mg / m³ gas), the incomplete coal combustion and poor response to load changes. "

In the literature we finds similar statements about the DriZzleR design. Which have proved in reality to be completely false. Does not produce tar, delivers bad gas and similar statements. This sentence had not been able to stop us refuting these theoretical literature. :-)

The pilot plant is operated in the first step only with standartized DIN wood pellets in 6mm diametre. Thus, one can assume that any "whims" not caused by the fuel in gasification.

The first tests were not really promising, The gasifier hurl tar up to the ceiling and around to the gasifier, it looked as if someone had the floor badly paved. But that's actually in any attempt at the beginning folds almost nothing. Doubters of system would now probably thinking, "Do you see has already told the literature". ;-)


The second test was promising. The flame was still not really "nice" but except of coal dust were no other undesirable ingredients more from the gasifier. The gasifier produced the most beautiful HHG (Heating degree gas). However, not so perfect that I would take the trouble to filter it. So after the test is prior to the test :-)


The third test run after some modifications was even worse than the first test. Tar and nothing as tar was produced.

Here's a video of this dirt stuff:


Until the gasifier running 4 hours and about 50kg pellets, a nice charcoal bed had formed. Then 80kg more woodpellets were put into the gasifier to watch whether the state can be considered as stable.


The flame had changed significantly. The "flame" now was what might be called "unfiltered" EGG. In order to increase the sucking force i switched on the ejector additionally.

To be really sure that this is not just a fleeting appearance of nature. I need to do this last test several times to really make sure that the results are reproducible.

So it remains exciting .... Now a lot of more few hundred kilos must be eaten by the gasifier. But problems with his figure, he certainly will not get :-)