Tom Blackburn did some very nice special update to his DriZzleR Gasifier you can found it on the Yahoo Woodgas Forum.

Hey All,
After my 4 hour run a couple of days ago, I had some interesting findings. In the 4 hrs only 8 lbs of fuel was consumed. This is way less than any previous runs. I don't know how to measure the flow of gas, but it put out a clear flame that is 2-1/2" in diameter and 18" long the entire time which is usual. The perimeter feed design seems to use a lot less fuel. Then I opened up the ash/char clean out and found nothing but a thin film of brown ash. It wouldn't have made a teaspoon full. I can't explain this. I started poking around in the fuel bed and found a thick rim of hard dense char adhered to the upper portion of the tapered walls. This is just below where the rotating chute drops the fuel. At this point the char bed is 6-1/2" in diameter, but was choked down to about 4". I got to thinking about this and realized that this char was insulating the incoming fuel from the wall heat so I decided to get rid of the tapered walls and form a ring shaped plate at that level so the incoming fuel has a place to land on that is like a shelf. The heat coming out of the char bowl is blasting right on the bottom of this shelf and does a real good job of pyrolyizing the fresh fuel placed there. The scraper on the rotating chute cleans off this shelf every 3 minutes and deposits the hot fuel in the center for further gasification. I also decreased the reduction tube from 3" to 2-/2" in the bottom section where the cone in the char bowl pokes up into it. So now, below the shelf, there is 4" of 4" pipe and then 3" of 2-1/2" pipe before the char bowl. Here is a link to a pic of the modification. 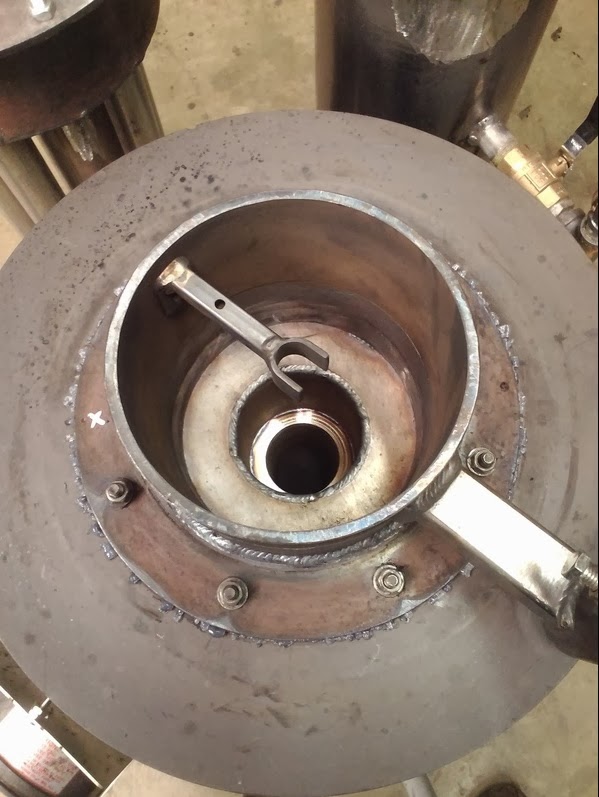 I also offset the cone by 1/8" in the bowl so it now acts like a mini gyro cone rock crusher. I then added a small 1 RPM BBQ rotisserie motor to the char bowl shaft and set it up on a relay timer so that every time the feed auger rotates once (3 minutes) the char bowl runs for 5 seconds.
Today's run was for two hours and after pouring some very fine char I had saved into the new set up, I lit off the char and let it glow for about 30 seconds, then turned on the auger feed, and 15 seconds later the flare lit and sustained a clear flame for the duration.

Here is a link to a short video of the modification in action.
http://youtu.be/MLkEqfPiWVo